Get Food in Train with easy steps

Order Delicious food in Train from FSSAI approved restaurants across 400+ stations in India. 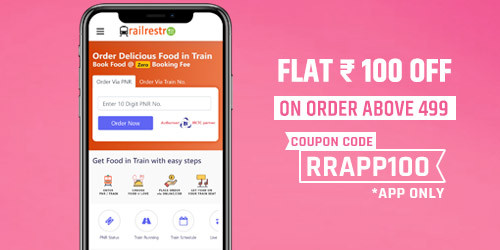 Really appreciated such steps followed by railway.i got my food on seat at time , A little improvement needed in food but overall experience was good, railway assign more food assistant on every station.

Best service on time dilevery and quality of food is good . Also packing is Good

I was with Negative mindset watching reviews, but my experience was extremely good, taste was awesome, delivery on time, guys please dont go on reviews take your own experience

I ordered food for my Grand Father. Food delivered at lucknow against was very good in quality .

Food for order no.170419 was awesome in quality and quantity.It was delivered to me in hot and well packaging.Overall I am satisfied with the service provided by Railrestro. I will definitely place an order on my next travel.

Food Delivery in Train at Manduadih

Get Fresh Food Delivery in Train at Manduadih Station

Passengers can order food online at Manduadih railway station on RailRestro’s app or website or calling at 8102202203. You can order food by entering your PNR number or train details.

Train food delivery at Manduadih Station includes local delicacies and a wide variety of meals from famous local eateries at Manduadih station from premium outlets such as:

Order food at least 30 minutes before reaching the Manduadih railway station from RailRestro and get timely delivery of restaurant food at your train seat!